What started as a book is now a multi faceted educational experience.

In writing my book Think Outside the Box Office (TOTBO), I drew on my own experiences distributing my film Bomb It, in addition to interviews with countless other filmmakers, distributors, publicists, web programmers, festival programmers and marketing experts to create the first step-by-step nuts and bolts guide to marketing and distributing a film in the 21st century. My goal was to provide a written resource to help other filmmakers and media content creators achieve their goals in distributing and marketing their films.

This mission continues, but now includes a live educational experience to accompany the information found in the book. In order to bring this type of engagement to all filmmakers, I have started a series of TOTBO Workshops around the world. These workshops are not only instructional, but give filmmakers the opportunity to have their projects discussed and strategized in front of the group of participants. I started these strategy sessions at the Slamdance Filmmaker Summit earlier this year and they have been well received. I plan to continue to offer the experience to all who find it beneficial.

In keeping with the educational mission, I am developing a website devoted to providing filmmakers around the world with tools and resources for the distribution and marketing of their films (Click on the Resources Tab above). My aim is to provide a way for filmmakers to rate and comment on these resources as well as to share their own experiences so that we can all learn from each other. I am also networking with other educators to have all of this material adopted into film school curriculums. As an educator myself (I teach in the Film Directing Program at California Institute of the Arts), I want to facilitate the process of course adoption by providing syllabuses and teaching guides free of charge to any faculty who requests one. It is essential that filmmakers must have the education and the tools to make great films, connect those films to an audience and in the process create long term careers for themselves. 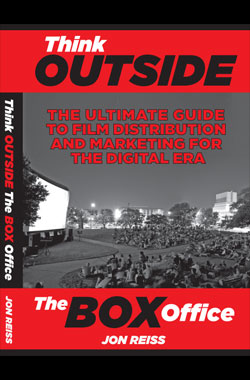 No matter what type of content you create – feature film, shorts, webisodes, transmedia, YouTube – this book is for you.

Unlike any other book on the subject, Think Outside the Box Office is the first to address the new distribution and marketing landscape facing filmmakers today. Throughout the book, award winning filmmaker and film professor Jon Reiss redefines film rights from a filmmaker’s point of view empowering the reader to create unique strategies for their individual films.

Reiss has created a break through step-by-step guide to distributing and marketing a film from a nuts-and-bolts perspective. Each chapter addresses an essential aspect of a film’s release and offers specific techniques so filmmakers can take control of their distribution and marketing destiny 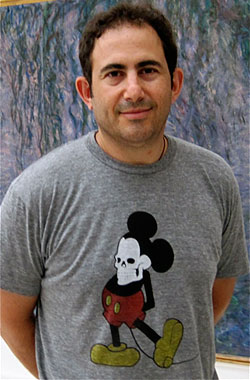 JON REISS Named one of “10 Digital Directors to Watch” by Daily Variety, Jon Reiss is a critically acclaimed filmmaker who has produced and directed three feature films most recently Bomb It about graffiti and the battle over visual public space throughout the world. Based on his experience releasing Bomb It with a hybrid strategy he has written Think Outside the Box Office: The Ultimate Guide to Film Distribution in the Digital Era. He also speaks around the world at film festivals, schools and organizations on this topic.

Jon teaches film the California Institute for the Arts where he created the class “Reel World Survival Skills: Everything I Wish I Had Been Taught in Film School.” This course covers the practical aspects of surviving as an independent writer/producer/director in today’s economy from finding a job, pitching and script development, to financing and new models of distribution.

His previous documentary feature film was Better Living Through Circuitry, a startling, humorous and entertaining glimpse into the exploding rave culture featuring such acts as the Crystal Method, Roni Size, and Moby, among others. The film played at such festivals as RESfest, Rotterdam, Sao Paulo, Copenhagen, Los Angeles Independent, Seattle, Vancouver, and Sheffield International Doc Festival before being released theatrically in the United States. Following its theatrical distribution the film had numerous screenings on Showtime and Sundance Channel as well as a worldwide DVD/VHS release.

As an award-winning music video director, Reiss has directed videos for Nine Inch Nails, The Black Crowes, Danzig, Slayer, and the Kottonmouth Kings. Reiss’ “Happiness in Slavery” video for Nine Inch Nails won awards at the Chicago and San Francisco film festivals and was voted Top Ten by the Village Voice Critics Poll for Best Music Video. In 1995 the Toronto Film Festival curated a retrospective of Reiss’ music videos. His shorts screened at festivals throughout the world including Sundance, Berlin, New Directors/New Films, Edinburgh, and Chicago. Reiss received his MFA from the UCLA Film School.

Jon Reiss’ early credits also include four hour-long documentaries concerning the notorious performance group Survival Research Laboratories. These documentaries have screened in festivals, theaters and cultural centers throughout the world. All were included on a compilation DVD 10 Years of Robotic Mayhem released Summer 2004. Reiss got his start in filmmaking at Target Video, a San Francisco based alternative video company where he covered much of the West Coast punk explosion.